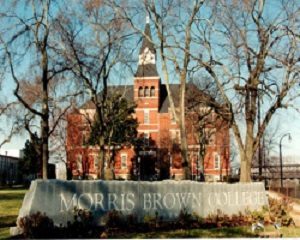 Produced by Historic Westside News youth journalists, our “Legacy Keepers”, the above video highlights the lynching of Sam Hose,a young black laborer on a farm outside Atlanta, Hose got into a dispute with his employer and killed him in self-defense. During the ensuing ten-day manhunt, the rival Atlanta newspapers excited their readers by competing on lurid details. As days went by, rape, infanticide, and other “unnatural acts” were added to descriptions of the crime.For W.E.B. Du Bois the lynching was an awakening. Having arrived at Atlanta University two years before, the pleasantries of his studies were shattered,

Fountain Hall, the historic tower owned by Morris Brown College, has received an important $75,000 grant from the National Trust for Historic Preservation.W.E.B. Du Bois was an important figure in the development of African-American education and the philosophy of the 20th century freedom movement. Fountain Hall, built in 1882, was given the grant for the critical role it played in the history of the Atlanta’s black colleges and universities. The announcement described Fountain Hall in the following way.“With its distinctive tower situated at the top of Atlanta’s “Diamond Hill,” Fountain Hall housed W.E.B. Du Bois’ office, where he wrote his seminal work, The Souls of Black Folk.

A Fisk University and Harvard educated historian and sociologist, Du Bois joined the faculty of Atlanta University in 1897. He distinguished himself and the programs at AU by conducting rigorous sociological studies, hosted conferences, and published extensively about the impact of slavery and class on the oppression of black people.The Souls of Black Folks, which laid bare the impact of slavery and race on American society. He also founded and edited the journal, Phylon: The Atlanta University Review of Race and Culture. Du Bois did much to earn his reputation as a leading educator, and a radical spokesperson for African-Americans. Du Bois opposed the “Atlanta Compromise,” articulated in a speech given in 1895 by Booker T. Washington, founder of Tuskegee Institute. This compromise traded the good behavior of Southern blacks for basic educational and economic freedoms from whites. DuBois felt strongly that blacks should be fighting for equal rights, not compromise. .

Morris Brown College is located on the elevated Diamond Hill site at the northern end of the Atlanta University Center. Fountain Hall faces east and sits above Martin Luther King, Jr. Drive, which runs along its north wall. A small parking lot is adjacent to the south wall. The building fronts a park-like setting with lawns, curved and linear walkways, benches, and large oak and pecan trees. From its construction in 1882 until 1929, Fountain Hall primarily functioned as the administration building for Atlanta University, though it contained a chapel, library, recitation rooms, and laboratories during various times in its history. It served in a similar capacity for Morris Brown College for many years. Currently, the structure contains offices, a chapel, art studios, and a gallery. Fountain Hall has been a gathering place and focus of activity in the education process of many of the mostly black Americans attending the university and college since its construction. Because of the building’s location, Fountain Hall can be seen from some distance and has long served as an impressive and identifying landmark for the historic Atlanta University Center.

Erected in 1882 on the crest of Diamond Hill on the Morris Brown College campus, Fountain Hall is one of the earlier structures for the original site of Atlanta University. Historically, Fountain Hall is significant to the city, state, and nation for its role in providing higher education to blacks in this country. It was for this reason that Fountain Hall was made a National Historic Landmark in 1975. Architecturally, this building is important as a work of G. L. Norrman. This Atlanta architect was active during the late nineteenth and very early twentieth centuries, but few of his works have survived. The three-story, red brick structure is also an excellent example of the High Victorian style, its clock tower a rare sight in Atlanta. Over its one hundred seven-year history, Fountain Hall has served as the location for administrative offices, as well as a number of other university activities, contributing greatly to the cultural fabric of the city through the education of its citizens

In the early 1930s, Morris Brown College relocated from its property at Houston and Boulevard. Since its affiliation with Spelman and Morehouse, Atlanta University was no longer using several of its original buildings. So In 1932, Bishop W. A. Fountain, former college president and then Chairman of the Board of Trustees, and his son, W. A. Fountain, Jr., President of Morris Brown, negotiated for the college to become part of the university system and lease some of the vacant buildings on the old campus. It was after this, that Stone Hall became known as Fountain Hall, named for Bishop William A. Fountain. In the 1940s, the college purchased the buildings, establishing a permanent home for Morris Brown College.