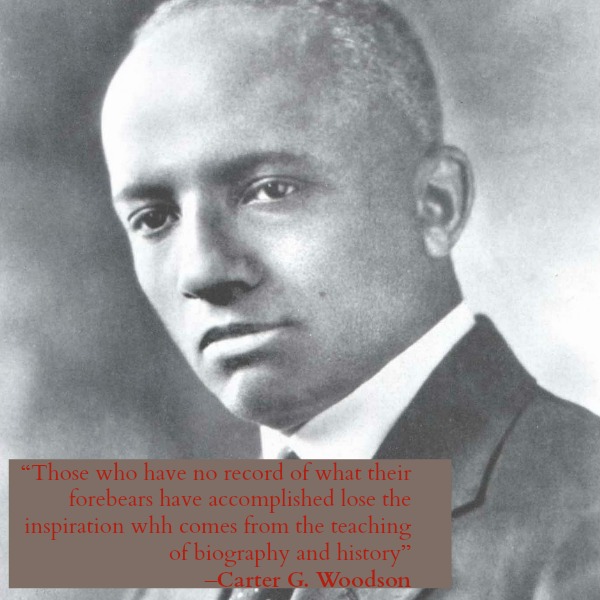 The precursor to Black History Month was created in 1926 in the United States, when historian Carter G. Woodson and the Association for the Study of Negro Life and History announced the second week of February to be “Negro History Week.”  This week was chosen because it coincided with the birthday of Abraham Lincoln on February 12 and of Frederick Douglass on February 14, both of which dates Black communities had celebrated together since the late 19th century.

From the event’s initial phase, primary emphasis was placed on encouraging the coordinated teaching of the history of American blacks in the nation’s public schools. The first Negro History Week was met with a lukewarm response, gaining the cooperation of the Departments of Education of the states of North Carolina, Delaware, and West Virginia as well as the city school administrations of Baltimore and Washington, D.C.. Despite this far from universal acceptance, the event was regarded by Woodson as “one of the most fortunate steps ever taken by the Association,” and plans for a repeat of the event on an annual basis continued apace.

At the time of Negro History Week’s launch, Woodson contended that the teaching of black history was essential to ensure the physical and intellectual survival of the race within broader society:

“If a race has no history, it has no worthwhile tradition, it becomes a negligible factor in the thought of the world, and it stands in danger of being exterminated. The American Indian left no continuous record. He did not appreciate the value of tradition; and where is he today? The Hebrew keenly appreciated the value of tradition, as is attested by the Bible itself. In spite of worldwide persecution, therefore, he is a great factor in our civilization.”

By 1929 The Journal of Negro History was able to note that with only two exceptions, officials with the State Departments of Educations of “every state with considerable Negro population” had made the event known to that state’s teachers and distributed official literature associated with the event.” Churches also played a significant role in the distribution of literature in association with Negro History Week during this initial interval, with the mainstream and black press aiding in the publicity effort.

Negro History Week was met with enthusiastic response; it prompted the creation of black history clubs, an increase in interest among teachers, and interest from progressive whites. Negro History Week grew in popularity throughout the following decades, with mayors across the United States endorsing it as a holiday.

Black history is American history. This natio was not built alone.  It’s time to include the history of all Americans including the history of Black and Brown people.