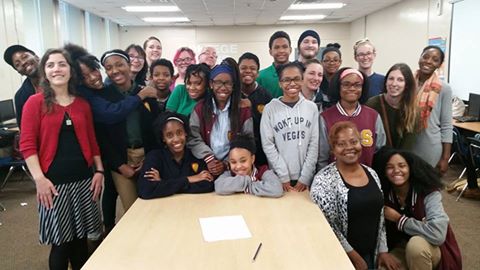 Author Byline:  Kalin Thomas is Program Director of the Wren’s Nest and an active resident of Historic West End.  Kalin studied Broadcast Journalism at Howard University and she is a former on-air reporter and producer for CNN.

The Wren’s Nest, Atlanta’s oldest house museum, is helping to groom young authors in our community.  The museum’s Scribes writing program is sponsoring students at Brown Middle School and KIPP STRIVE Academy. The 12-week program pairs the middle school students with writing professionals and semi-professionals, who help them learn how to put their imaginative ideas on paper. Over the course of a semester, the students learn about plot, character development, and the importance of research and revision to write creative fiction.

Kalin Thomas, Program Director of The Wren’s Nest, leads the program and added, “We give the students a new theme to write about each year.  And we’re always impressed with the imaginations of the Scribes.  They come up with some of the most unusual and interesting stories.  It’s a pleasure to watch them grow as writers.”

“It’s fitting that they would be writing about these unsung heroes during Black History Month.  In fact, four of the Scribes were chosen to present their inventors to families at the High Museum’s Second Sunday on February 12th,” said Thomas.

This will be the eighth book for KIPP Scribes, which will debut at the AJC/Decatur Book Festival during Labor Day Weekend.  The Scribes will do a book reading and book signing at that event, which is free and open to the public.

The Scribes at Brown Middle School finished writing their creative fiction stories in December.  Their new book, Beltline & Beyond, presents stories about their Southwest neighborhoods, including some that run along the Westside Beltline like West End and Westview.  This will be the fourth book for the Brown Scribes students, which will debut at their book launch at the school in May.

“We are hoping to get more of the Southwest community to come out to these book launches.  It’s not every day that you have young African American students becoming published authors. It’s a blessing to be a part of helping to make that happen,” added Thomas.