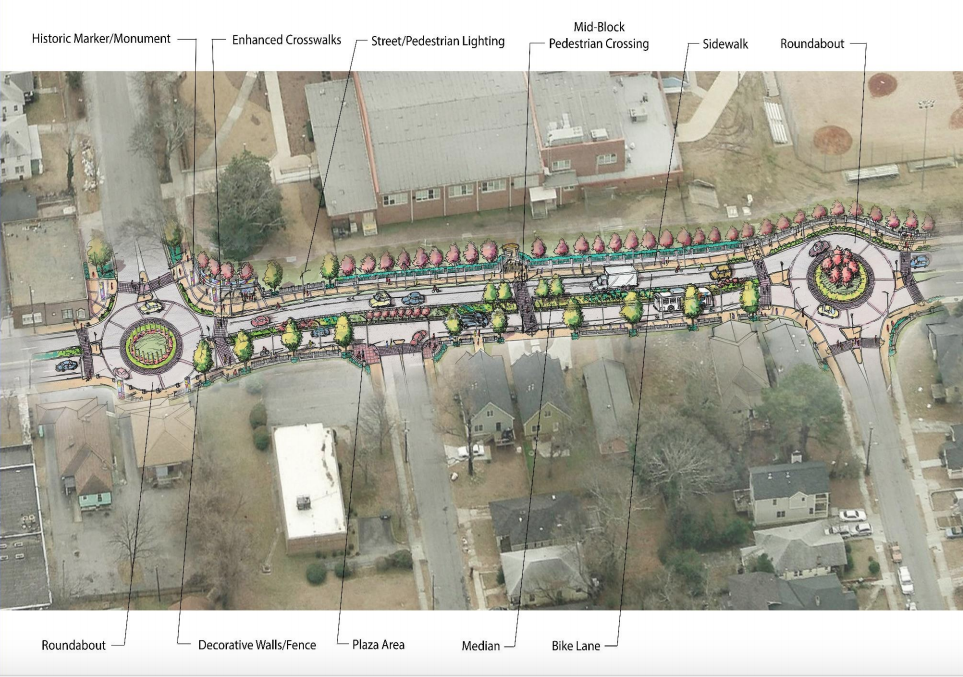 Some people say “less is more” and other people say “less is just less.” Two major roads on the Historic Westside are about to get a facelift with aesthetic and pedestrian improvements while being narrowed down from four lanes to two. Why are they doing this, and what are the implications? I spoke to some neighbors and city employees (and did a lot of googling) to find out. First, here are the projects:

1) Martin Luther King Jr. Drive
Mayor Reed has said MLK Drive should be “one of the most attractive streets in America.” To whit, Invest Atlanta voted in May to undertake a $60M facelift for 7.2 miles of MLK Dr. – $30M of which was hoped to come from a Federal grant (unfortunately only $10M was awarded). $1.3M will be coming from the Westside TAD to pay for improvements from Northside Dr. to James P. Brawley. Invest Atlanta states that “improvements will include: a 12-foot wide sidewalk with a 6-foot buffer strip, street and pedestrian lighting, green infrastructure, street furniture, and landscaping.” – along with narrowing the street to two lanes.

The Dept. of Watershed Management  is converting the stretch of Joseph E. Green from Northside Dr. to Mayson Turner to a “Green Street.”. The main purpose of this   project is to “provide capacity relief” for our combined sewer systems. The green street will capture, treat, and filter the first 1” of runoff from the roadway. Specially constructed 5-ft wide planters on either side of the road will  capture rainfall and run-off. They will pull water up into the plants, to filter and clean the run-off, and divert it into the catchment pond planned for Mims Park. The Dept. of Watershed Management will also improve the sidewalks, lighting and add bike lanes on both sides of the road which will be reduced from 4 to 2 lanes to accommodate the changes. $1M from the Westside TAD was approved for this project.

What do neighbors think? I spoke with Thomas Hutegger, a resident of the Just Us neighborhood. “Most people are just driving through,” he said. “I’ve never seen a car buy anything, only people buy things.” Hutegger is excited to see MLK transformed into a more beautiful and pedestrian friendly place, which he believes will encourage more pedestrian traffic and therefore bring in more dollars for the small businesses and restaurants along this strip.

Yet several neighbors have raised concerns about increased traffic from narrowing the roads down to two lanes. One woman said,. “If they cut the lanes, it would increase the traffic by a lot, downtown and all over the city. Honestly, the four lanes they have aren’t even enough; it should be six.”

Snapper Mack of Castleberry Hill has said “It will be a beautiful place to drive up, if you got room to drive up” but he notes that a broken-down car or a truck making a delivery in one lane would stop all traffic. Therefore he recommends using a reversible lane, which would be helpful for channeling Falcons traffic.

Another neighbor said, “let’s not forget that MLK is not only the most important east/west connection into downtown, it’s the only connection. Reducing capacity there would kill the businesses on the MLK corridor and further cut off the Westside from downtown and the hope of us developing our neighborhood into the vibrant, thriving community it was when I grew up here 50 years ago.”

I spoke with Julie Owens, one of the project managers for the Boone Blvd. project. She said that an extensive traffic study was done and that traffic would not be adversely affected in a significant way because there’s so little traffic on that section right now.

“I live one block from Boone and use it a lot, and I agree that it’s usually very light traffic. I looked at the traffic study and it does show very little change in wait times at 90% of the traffic signals, although the intersection at Northside Dr. & Joseph E. Boone is projected to have double the wait time for Eastbound traffic in the morning. Westbound times aren’t as bad, but still significantly longer than they are currently.

Some neighbors have said it’s okay if wait times increase on MLK and Boone. They argue that MLK and Boone are currently used by commuters from outside the perimeter, avoiding traffic on Hollowell and I-20. So it’s better for actual neighbors if the route slows down. Stacen Mcintosh of Vine City said “I like the idea of narrowing MLk Dr. It would be more attractive to have this in the area. I like the idea of coffee shops and restaurants as opposed to it being an alternative for I-20. I think this would be a good transformation for this side of town!”

One neighbor concerned about gentrification said, “Please contact Senator Vincent Fort to voice your concerns. The residents in C.T. Martin’s district met with the Commissioner of DOT and the narrowing of MLK Jr  Dr. to Fulton Industrial Blvd. was rescinded. Our collective voices cannot afford to remain silent and reactive on this issue!” Apparently, if you’re concerned about the changes, you can be heard.

This project is about a lot more than narrowing roads. On MLK the wider sidewalks, bike lanes, street furniture and beautification could make this strip much more attractive and enjoyable for pedestrians. The Boone project is intended to have a significant impact on managing the flood issues we have in English Avenue and Vine City (which is a major issue on the minds of English Avenue residents).

Whether narrowing the road will have a positive impact on businesses and neighbors remains to be seen.

Jesse Phillips lives in the neighborhood of English Avenue