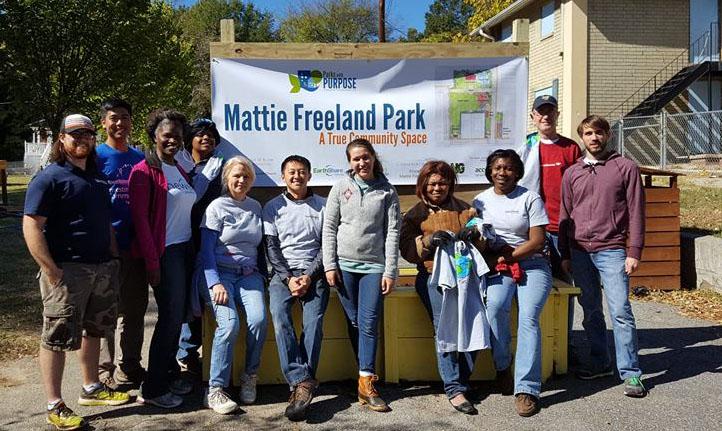 How to Build a Park

Author bio: Jesse is a resident of English Avenue, member of EANA and owner of NeuYear.net.Parks and greenspace are a wonderful addition to any neighborhood, as they give neighbors a public place to play, gather, relax and enjoy nature. The Westside could use more beautiful public spaces but, where do parks come from? How do they get built?

I spoke with Stephen Causby of New Life Covenant Church who has been working on building the Mother Mattie Freeland Park in English Avenue for the last 9 years. In 2008 they started with a tiny lot right across from Mother Mattie’s house, at the corner of Echo & Dalvigney. Stephen was talking with Mother Mattie (not to be confused with Mother Mamie Moore) and wanting a way to get neighbors out of their houses and getting to know each other more. Mother Mattie said, “y’all should do something with that junk lot over there, it’s a bunch of broken down cars & tall weeds. I’d like to look out my window and see something pretty one day.”

“When Mother Mattie passed away we thought, “y’know we really should do something over there,’” said Stephen, “so we got the neighbors on that street and the neighbor kids and we put on raised beds and started a little garden.”

“We cleaned it up and kids were playing there and people had cook-outs. And the owner of the apartments across the street noticed. And he offered to let us use a larger lot/field that was attached, since they weren’t going to build on it for the next 5 years.”

They cleaned that area up too. They did research and found some grants and were able to partner with Trees Atlanta, Hands on Atlanta, different churches, corporate work days and other organizations to plant trees and move the junk out. It started to look like a real park.

“We had an informal handshake agreement with the owner, which was fine for temporary uses like this… Talk to the property owner and make sure you don’t do anything permanent or illegal or anything that would tick them off,” said Stephen.

Around this time, there was a pretty nice playground on a lot on Elm St. That was the closest playground that all the kids used. But when that lot was turned-in to new condos, the playground was removed. So, there was a pressing need. “We really needed an open, free, accessible playground that our neighbors could use.” So they talked to the property owner, and got permission to put something up. Neighbor Billie Walker talked to Peachtree Presbyterian and got a backyard playground donated for their budding park.

Slowly, over years of community cleanups, applying for grants, taking baby steps, hosting events, engaging neighbors, they’ve created a nice little space. They don’t own it all yet, they’ve had to rely on relationships with the property owners, and take care of the space to keep it nice. But they’ve built momentum.

With that momentum they’ve demonstrated commitment and power to get things done, which allows them to win bigger grants, which brings more momentum. It’s a virtuous cycle that begins with hard work, initiative, and really just cleaning-up, decorating and using a vacant lot. As the space gets used & maintained, momentum is built, which helps you win grants to do more.
Now they’re asking foundations to help them acquire the lots. They even captured the attention of the Blank Foundation and other organizations that are investing in the Westside, and were able to rebuild Mother Mattie’s house into a tiny community center!